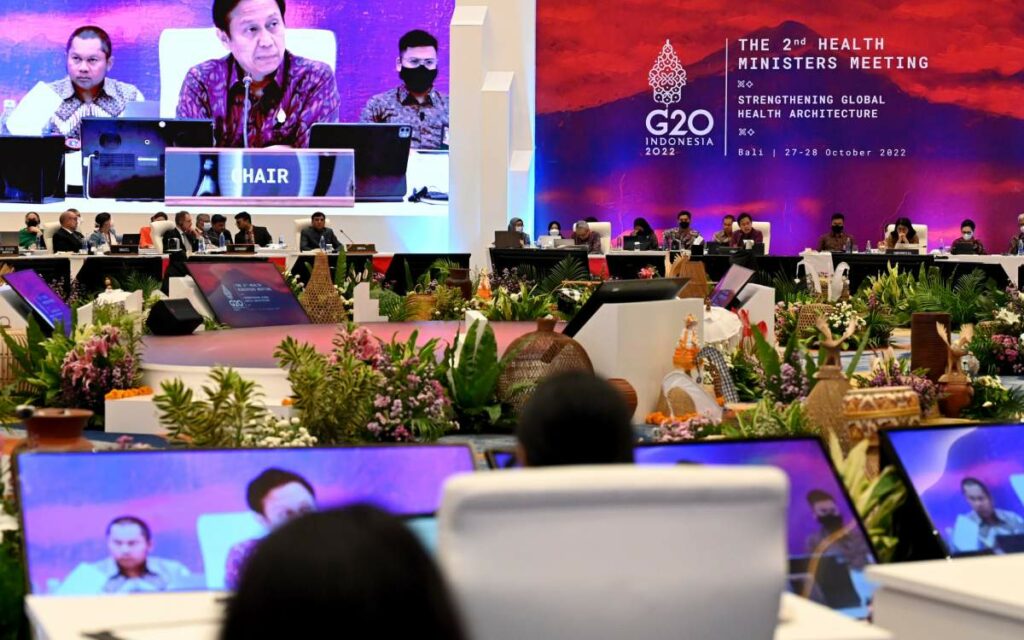 And Canadians, by way of the ArriveCAN app, may just have been the guinea pigs. Pictured is the G20’s 2022 health ministers meeting. Note the theme, “strengthening global health architecture”. Photo credit: AFP/Sonny Tumbelaka

Last week in Bali the G20 nations agreed to continue establishing vaccine passports and introducing a global digital health ID program. The Trudeau government’s ArriveCAN app and digital ID work are central to advancing these international initiatives. (This is not conspiracy; it is fact.)

Not surprisingly, Canadians know little about this activity as the federal government obfuscates the role it plays in the World Economic Forum (WEF) work to establish a global digital ID network. Furthermore, this news item is not being reported in Canada’s subsidized mainstream, legacy media.

So, here are the facts (with links to the original documents) of the declaration document signed in Bali last week by Canadian PM Justin Trudeau and the other G20 national leaders.

On the vaccine passport, the G20 resolution reads: “We acknowledge the importance of shared technical standards and verification methods, under the framework of the IHR (2005), to facilitate seamless international travel, interoperability, and recognizing digital solutions and non-digital solutions, including proof of vaccinations.”

By way of background, the “IHR (2005)” is in reference to the International Health Regulations (2005). This document was developed under the auspices of the World Health Organization (WHO) and it sets out the global framework for responding to the international spread of disease. In other words, it is the playbook that countries are obligated to follow during international pandemics (or any perceived global health emergency dictated by the WHO).

With respect to the global digital health ID program, the G20 countries committed to “international dialogue and collaboration on the establishment of trusted global digital health networks as part of the efforts to strengthen prevention and response to future pandemics.” Among its member states, the G20 leaders resolved to widespread adoption of digital documentation of COVID-19 certificates that can track individuals’ movement with an “technology-enabled ‘always-on’ global health infrastructure.”

The vaccine passport and digital health ID resolutions were not spoken of when Indonesia President Joko Widodo presided over the closing ceremonies for the G20 Summit and celebrated the adoption of the “G20 Bali Leaders Declaration.” Given the significance of these initiatives, it is inexplicable that they did not appear in G20 communiques or media. Remarkably, no final declaration document is found on the official G20 website. (Canadians are left to speculate why the resolutions were not mentioned in any of PM Trudeau’s communications – or any other world leader for that matter?)

However, evidence of these international commitments can be exhumed in a background document published by The White House: articles 23 and 24 in the G20 Bali Leaders Declaration. Also, the G20 nations’ cooperative drive towards a global digital ID is described in part on pages 50 – 56 of their bureaucrat-speak tome entitled: Final Communique: Policy Recommendations to the G20.

Though PM Trudeau appears reluctant to talk about the work the Canadian government has undertaken on these international initiatives, there are many related developments in Canada regarding vaccine passports and digital IDs that are of public record. Here are three.

In juxtaposing the Bali Leaders Declaration with these apparently separate occurrences there are obvious questions relating to Canadians’ privacy and civil rights, and possible government overreach. These very questions are today part of public debates in Europe where the European Union (EU) has been more transparent about its plans to morph the existing EU vaccine passport with a new digital ID program.

One vocal critic of the global digital ID program is Eva Vlaardingerbroek, a Dutch news commentator who has been connecting the dots between vaccine passports and what she surmises is the globalists’ powerplay. Recently she has rang alarm bells about the KLM airline coupling digital passports and facial recognition software to board flights, WHO technocrats talking about “the next pandemic,” and French President Emmanuel Macron openly proclaiming at last week’s APEC Summit in Asia that, “We need a single global order.”

Vlaardingerbroek is very concerned about the plans for the EU’s Covid-19 health certificate app, which is described as a vaccination passport that eases travel within Europe. The EU has announced it intends to introduce a new “digital wallet” for its 450 million citizens to carry the health app in. The wallet is to serve as the individual’s proof of identity and, according to EU technocrats, it could expand its functionality to permit users access public and private services in their own countries and across the bloc of European nations: cross over borders, verify vaccination records, open a bank account, enroll in a university, rent a car, file tax documents, etcetera.

Picking up on the potential of the EU digital wallet, in a recent media spot Vlaardingerbroek paints the nightmare scenario that she sees playing out: “We are heading towards a new system of tyrannical regime of mass surveillance and control. This is not just a hunch but this is part of a bigger plan… We have had this digital COVID pass in place in Europe, which is basically a QR code on your phone, that grants you access to everyday life… This is a European digital identity. This will not stay just linked to your vaccination status. This will be encompass taxes, your medical records apart from your vaccination status, your bank information… basically we already have a system in place right now that is the beginning phases of a social credit system. We are literally turning into China.”

In Canada, the Vlaardingerbroeks of this world are dismissed as conspiracy theorists. It is as if the resolutions of the Bali Leaders Declaration are of no consequences to Canadians, no connections with our ArriveCAN app, frozen bank accounts, or responsibilities for the WEF’s global ID program.