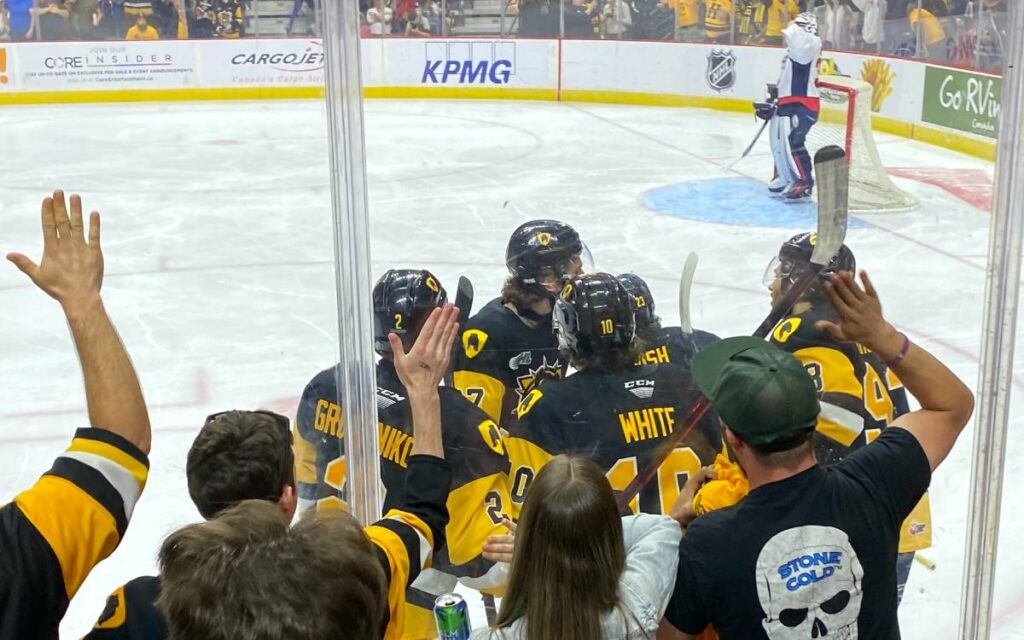 Bulldogs players celebrate after a goal during Game 7 of the OHL Finals against the Windsor Spitfire on Wednesday, June 15, 2022. Photo credit: The Hamilton Independent/Kevin Geenen

The Hamilton Bulldogs are OHL champions for the second time in the franchise’s history.

Despite being a new OHL team that has only been in Hamilton since 2015, the Bulldogs have already won two OHL finals. The team won in 2018 and on Wednesday Hamilton became the 2022 OHL champions by beating the Windsor Spitfires 6-1 in front of a packed crowd at the FirstOntario Centre in Game 7 of the finals.

Despite the lopsided score in favour of the Bulldogs, the score was actually much closer for most of the game. Mason McTavish opened the scoring on the first shot just two minutes into the game. Still, the Bulldogs’ second goal didn’t come until thirteen minutes into the second period when Avery Hayes scored on a similar shot.

The Hayes goal was challenged by the Spitfires over a possible goaltender interference, but the OHL video review team determined it was a good goal. Two more Bulldogs goals came in the third period putting Hamilton up 4-0 before Windsor pulled one goal back.

But two empty-net goals by McTavish and Hayes put the game well out of reach and resulted in the final scoreline of 6-1. The FirstOntario Centre recorded an attendance of 11,779, the largest crowd in OHL Finals history. As far as game attendance is concerned, the Bulldogs have the advantage of a larger-than-average stadium compared to other OHL teams.

The FirstOntario Centre was originally built in the hopes of attracting an NHL team to the city. Thus, it has a capacity of approximately 17,500. For comparison, the Windsor Spitfires arena holds only 4,400 people.

The Game 7 win for the Bulldogs comes after a challenging series. The Bulldogs dominated their way into the final round by winning twelve straight games, dispatching the Peterborough Petes, Mississauga Steelheads, and North Bay Battalion four games to zero. Windsor proved much more of a challenge for the team.

The Bulldogs’ season seemed to be in jeopardy at multiple points throughout the series. Hamilton was down in the series two games to one, before winning a tight Game 4 in Windsor in overtime. The team could easily have gone down 3-1 in the series.

It also didn’t help that Bulldogs captain Colton Kammerer was out injured since early in Game 2 of the final series and OHL Defenceman of the Year Nathan Staios was out injured until Game 4 of the series. Kammerer remains injured. It’s unclear when he will return.

The Bulldogs will now travel to New Brunswick for the Memorial Cup, which takes place Monday, June 20 until Wednesday, June 29. The Memorial Cup includes the championship teams from the Western Hockey League (WHL) and Quebec Major Junior Hockey League (QMJHL) and is the most prestigious trophy in junior hockey in Canada. This year the four teams in the Memorial Cup are the Hamilton Bulldogs, Saint John Sea Dogs, Edmonton Oil Kings, and Shawinigan Cataractes.

The Memorial Cup begins in a round-robin format with each of the four teams playing each other once. The first-place team after the round-robin advances directly to the finals. The second and third-place teams advance to the semi-finals and the fourth-place team gets eliminated. Whichever team wins the semi-finals plays in the finals in a single winner-take-all game. That game will take place on Wednesday, June 29. The Bulldogs have never won the Memorial Cup – they placed third in 2018.