Poilievre and Trudeau faceoff for first time as opposing leaders 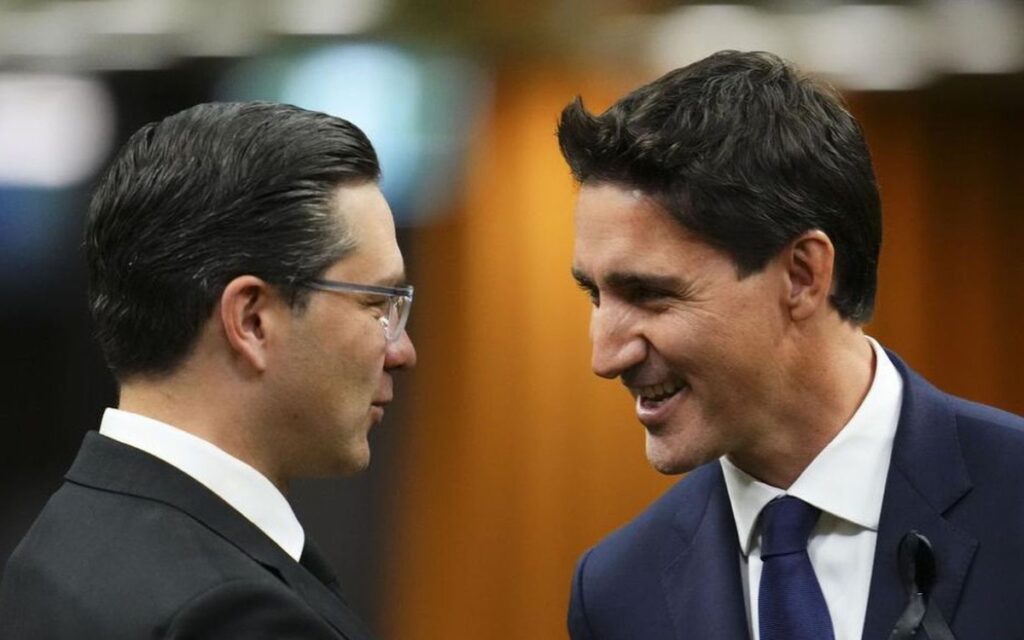 Newly elected Conservative leader Pierre Poilievre and Prime Minister Justin Trudeau greet each other in the House of Commons while marking the passing of Her Majesty, Sept. 15, 2022. In their first real showdown as leaders of their respective parties last week, Poilievre and Trudeau laid out divergent visions for Canada’s future and varying solutions to the country’s most pressing problems. Photo credit: The Canadian Press/Sean Kilpatrick

The House of Commons was back in action last week after the summer break, and with a new Conservative leader ready for battle, the stage was set for the ultimate showdown between the Prime Minister and Pierre Poilievre.

Though, the week did not start off on the high note many expected, with the Prime Minister away attending to state business at the Queen’s funeral and then at the UN. The main event had to wait until Thursday when the Prime Minister returned to Ottawa.

Trudeau’s absence, however, did not keep the government from introducing its plans to tackle affordability, which is the new and popular buzzword among politicians. Given how inflation continues to grow, it is a safe bet that affordability will remain on the minds of Canadians and their elected leaders.

The government introduced two pieces of legislation to help families struggling to make ends meet. Finance Minister Chrystia Freeland introduced the first bill on Tuesday that will temporarily double the existing GST tax credit for the next six months.

While the second bill, also introduced last Tuesday, will provide a one-time top-up to the Canada Housing Benefit to deliver $500 to 1.8 million renters who are struggling with the cost of housing. It also creates a new dental benefit that will deliver direct payments to the families of children under 12 without access to dental insurance.

It is clear that the government is concerned about the cost of living and is trying to make life affordable for more Canadians, especially those struggling or in the lower tax brackets. Though, its approach of sending out cheques has left some scratching their heads and wondering who will cover these added costs.

The simple answer is taxpayers and everyday Canadians. If you are a fiscal hawk, like Tory leader Pierre Poilievre brands himself as, this is concerning. The Tories were quick to raise concerns about the rising cost of living and how raising taxes on all Canadians to pay for these temporary measures is short-sighted and will cause more damage than good.

Fast-forward a few days and this set the stage well for the Thursday clash between Pierre Poilievre and Justin Trudeau. It was the moment all politicos were waiting for following Poilievre’s election earlier this month. There is a long history and disdain between these two politicians who both feel like the other is entitled, arrogant, and wrong.

While the exchange on Thursday was fairly tame compared to previous meetings, they both believe in different approaches to solving Canada’s problems. During Tuesday’s Question Period, the Minister of Tourism and Associate Minister of Finance, Randy Boissonnault, stood up in response to a question with an answer that really framed the rest of the week and likely the narrative leading up to the next election.

Boissonnault explained Canadians would be seeing two competing visions for Canada over the coming months and then recited some talking points on how the Conservatives will lead Canada into an era similar to the Handmaid’s Tale. Looking past the partisan rubbish, he made a good point about the competing narratives that came to fruition as the week progressed.

On one side of the coin, you have the Liberals who believe that the best social program is one provided by the government that delivers ongoing and increasing support to those who need it. Through means-tested solutions, the government can administer programs, usually including a cheque, to elevate those who are struggling. These programs are paid for by increasing taxes on those who can afford to pay them.

Whereas the Tories, who have a very traditional Conservative leader now, believe that there should not be increased tax hikes on Canadians but argue that the best social safety net comes from an individual’s family and community. Raising taxes on the average Canadian is a short-term solution that will cause long-term harm.

This can be seen through the repeated calls from Tory MPs to cancel the tax hike on paychecks, remove carbon taxes, and provide individuals with more freedom to choose how to spend their money.

As the week wore on, this messaging and difference in approach became increasingly clearer. The Conservatives called on the government to end their tax hikes and the Liberals responded by calling on the Conservatives to support Canadians through their proposed legislation.

The ultimate decision on who has the best approach to solving Canada’s affordability crisis will be made by Canadians themselves during the next election.

No matter when the election will be, there will be enough sparks flying in Ottawa to heat the homes of Canadians for the chilling winter ahead.

Daniel Perry is a consultant with Summa Strategies Canada, one of the country’s leading public affairs firms. During the most recent federal election, he was a regular panelist on CBC’s Power and Politics and CTV Morning Ottawa.