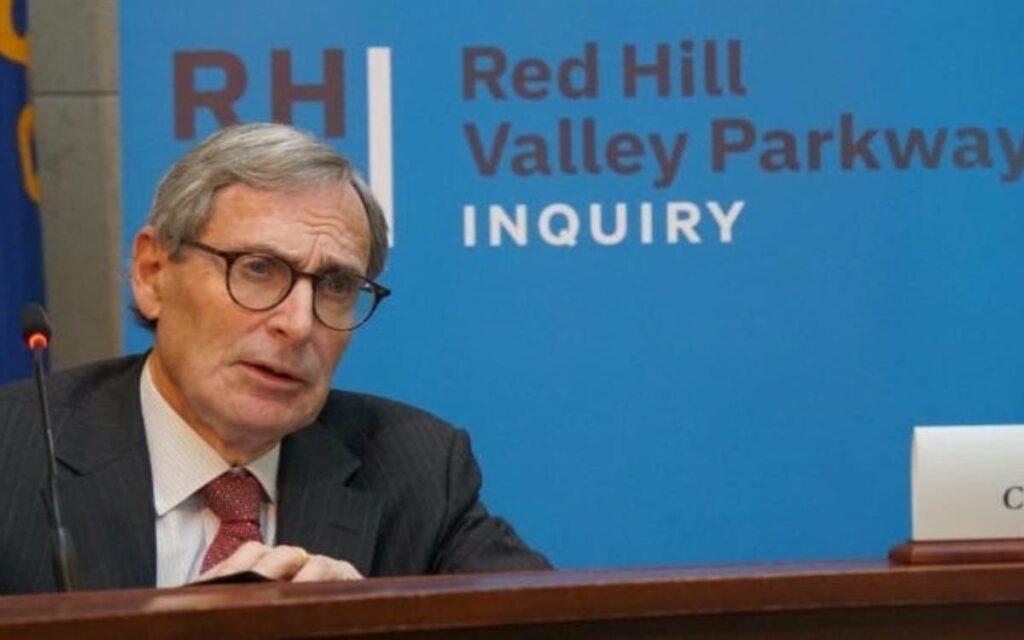 The Judicial Inquiry into the Red Hill Valley Parkway (RHVP) started this week. The inquiry was requested by the City of Hamilton and the first phase of public hearings will focus on questions relating to the construction of RHVP, friction testing conducted by Ontario’s Ministry of Transportation on the RHVP, consultant and staff reports on the RHVP, and the discovery and public release of the 2013 report on friction testing.

The second phase of the inquiry will focus on expert evidence looking at how friction and other factors contributed to motor vehicle accidents on the RHVP, as well as the related policy and governance issues at the City of Hamilton.

Notably, the additional witnesses include many City of Hamilton employees and elected officials, such as Mayor Fred Eisenberger, Councillors John-Paul Danko, Tom Jackson, Sam Merulla, and former Councillor Doug Conley. The witness list also includes many of the key employees in Public Works who would had been involved with the construction and maintenance of the RHVP.

The Red Hill Valley Parkway (RHVP) Inquiry introduced all the “participants” authorized by the presiding Commissioner (Justice Herman J. Wilton-Siegel). Missing from the RHVP Inquiry were those parties who requested to participate into the inquiry but were denied by the Commissioner. As reported by The Hamilton Independent, the Commissioner’s decision prevents the many victims who were injured in car accidents on the RHVP to formally participate in the inquiry, including those families who lost loved ones.

The City of Hamilton then introduced a motion to prevent specific documents from being examined by the RHVP Inquiry. In specific, this included documents subject to solicitor-client privilege, where the City claims legal advice it had received from its lawyers should not be reviewed and examined by the inquiry. The Commissioner’s lawyers disagree with this claim. The City’s motion asks the Commissioner to appoint a “Designate” in order to review and decide on the question if the privileged documents should be released to the inquiry.

Commissioner Wilton-Siegel agreed with the City’s motion to appoint a Designate and selected the Honorable Frank Marrocco to decide on this question of privilege. A separate hearing will be scheduled for this matter.

Finally, the RHVP Inquiry released 11 exhibits providing an overview of the many emails, documents, reports, interviews, and chronology of events in regard to the issue of asphalt friction testing. This includes the City’s management of the friction report, the roles of the City’s consultants, and the involvement of the Ministry of Transportation. The overview documents are to be tested for truth at the RHVP Inquiry.

The RHVP Inquiry, via the Commission’s lawyer Andrew Lewis, called its first witness.  The witness was Dr. Gerardo Flintsch, a Professor of Engineering at Virginia Tech College of Engineering and a Director of the Centre for Sustainable and Resilient Infrastructure. The professor’s credentials make him an international expert in asphalt and friction (known as vehicle pavement interaction).

Dr. Flintsch prepared a report and gave testimony for the RHVP Inquiry revealing the science of pavement friction and measurement. The report references that there are no standards in Canada (either nationally or provincially) relative to pavement friction on highways. However, the report references that the Ontario Ministry of Transportation does have practice and policy respecting highway friction management, including approved aggregate sources (asphalt) and testing. Although, these provincial policies are not publicly published.

During the cross examination of Dr. Flintsch, the City of Hamilton’s lawyer highlighted that no standardized friction measurements exist in the province.

The second witness called by the Commission’s lawyers was Russel Brownlee, a professional civil engineer and President of True North Safety Group (TNS). Brownlee’s TNS company specializes in forensic investigations related to transportation facility design and Brownlee himself is qualified by the Superior Court of Justice as an expert witness on transportation design and management.

Brownlee also prepared a report for the RHVP Inquiry. The report identifies that Ontario’s municipalities are not legally bound to follow any road design and maintenance standards. However, the report extensively reveals that there are several best practices and due diligence that municipalities follow in the management of their roads and highways.

After two days of expert witness testimony, the Commission then called upon Dr. Ludomir Uzarowski, a senior pavement and materials engineer and a Principal of Golder Associates Ltd.

The Hamilton Independent will report on Dr. Uzarowski’s testimony when the official transcript is published.

The RHVP Inquiry, three years after being requested, has finally started public hearings.  The Commission has received testimony from two expert witnesses on road design and friction testing.

The question of the City’s privileged documents will be determined via a separate hearing overseen by former Justice Frank Marrocco.

The province of Ontario has no standardized performance standards on road friction, however municipalities do follow best practices and due diligence with road design, management and measurement.