Trudeau’s and Freeland’s fiscal management is no laughing matter 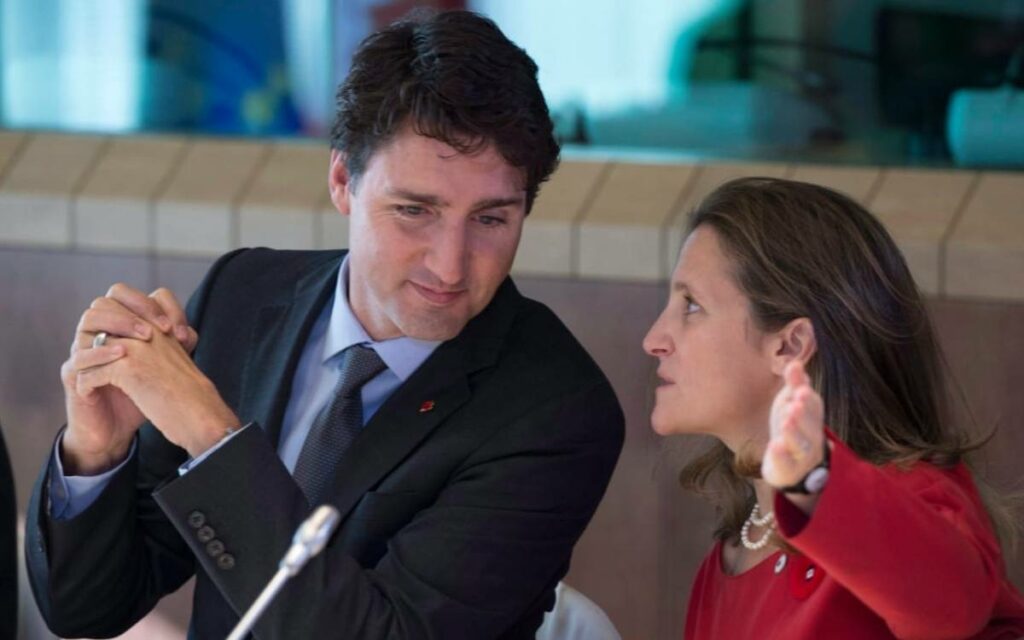 Prime Minister Justin Trudeau and then-Minister of International Trade Chrystia Freeland in 2016. In recent years, this photo has been used for a meme that, as described below, accurately sums up Ottawa’s fiscal mismanagement. Photo credit: The Canadian Press/Adrian Wyld

There is a political meme circulating these days of PM Justin Trudeau and Deputy PM and Finance Minister Chrystia Freeland whispering to one another. Trudeau leans over to ask, “How did we destroy the economy so badly?” Freeland reminds her friend, “Well, you’re a drama teacher and I’m a journalist, so…”

The country’s financial community may have known for some time but now there is an increasing number of Canadians learning that this meme accurately sums up Ottawa’s fiscal mismanagement.

Again, this week the economic news is grim for Canadians.

The country’s inflation rate hit 8.1 per cent, and that was after the Bank of Canada shocked our financial markets with a full percentage point interest rate hike. The stubbornly high inflation rate spells more interest rate shock therapy in the near future, and inevitability that is sure to exacerbate the financial woes most Canadians are stressing over these days.

Statistics Canada factors the price of store-bought food in Ontario has risen by 10 per cent or more since last June (in April and May it was 9.7 per cent). Stats Can also reveals gas prices have risen more than 55 per cent compared to a year ago.

The rising cost of living is taking its toll on Canadians. A MNP survey reveals 59 per cent of Canadians are concerned about their financial situation, and 27 per cent are cutting back on food, utilities, and housing just to get by. The Toronto organization Stop Community Food Centre reports that there has been a 26 per cent increase in families with children accessing their food bank in 2022.

Many financial experts have assessed Canada’s current economic state and point to the federal government’s spending as the primary cause of pain that Canadians are only beginning to feel. In an informative National Post column, John Ivison interviews Philip Cross, former chief economic analyst at Statistics Canada. Cross provides this important background:

“Nearly two years ago, the OECD said that, as Canada’s GDP fell by 10 per cent in the second pandemic-hit quarter of 2020, household income grew by 11 per cent, thanks to generous government hand-outs. The same phenomenon did not happen in Germany, France, the U.K. or the U.S.”

Cross states that the 2020 pandemic year was “the only recession in Canadian history where people were actually better off.” He says, “We just stuck a huge mixer in the economy and hit top speed. We are still trying to figure out what happened.”

The Liberal government followed up its 2020 pandemic experiment with yet further spending. Finance Minister Freeland’s 2021 and 2022 budgets earmarked billions of dollars in new initiatives. With Trudeau and Freeland, there appears to be no forecasted balanced budgets.

A recent report by the Fraser Institute calculates that the federal debt per person has grown to a total of 35 per cent under Justin Trudeau since 2015, which includes an increase of more than 25 per cent from 2019 to 2022. Soaring annual deficits are sure to be the hallmark and the legacy of the Trudeau government.

Franco Terrazzano, Federal Director of the Canadian Taxpayers Federation, has described this government’s spending as being seriously out of control. After Freeland’s 2021 fiscal update, Terrazzano sounded the alarm bells: “The cost of living is soaring and Canadians should be worried about how the government is going to pay for its unprecedented spending and hundreds of billions of dollars in new debt. The feds need to stop dishing out cash we don’t have and pouring fuel on the inflation fire. Freeland needs to hit the brakes on this government’s runaway spending train.”

This week in a BNN Bloomberg News interview, former Bank of Canada Governor David Dodge echoed the concern that the federal government was adding “fuel to the fire.” Dodge called on Freeland to postpone the government’s 2022 budget expenditures to help get inflation back under control. His advice to Canadians was to contact MPs to “ask the [finance] minister why she’s not doing what she can from her side in order to help control the excess demand at the moment.”

Chrystia Freeland has heard the suggestion from the financial community a few times recently that she is not doing enough to combat inflation.

This repeated critical analysis of Freeland from the country’s leading financial minds has left Canadians shaken. Four of every five Canadians have lost faith in the Trudeau government to manage the country’s economy. According to a recent Maru Public Opinion poll, 55 per cent of Canadians do not believe Trudeau has a “solid plan” to battle inflation and weather the country through economic troubles. Another 25 per cent believe the PM is on the wrong track.

In the same poll, Canadians showed no more confidence in Chrystia Freeland: 55 per cent of Canadians believe that the finance minister has no plan to tackle inflation and 24 per cent believe Freeland has a specifically “bad plan.”

On one hand we have Justin Trudeau who frankly admitted that he does not think about monetary policy and, on the other hand, we have Chrystia Freeland who nonsensically lectures us that inflation is the reason we must double down on climate change.

There is no wonder how “we” got into this economic mess. That meme of the two of them would be funny if it were not so true.