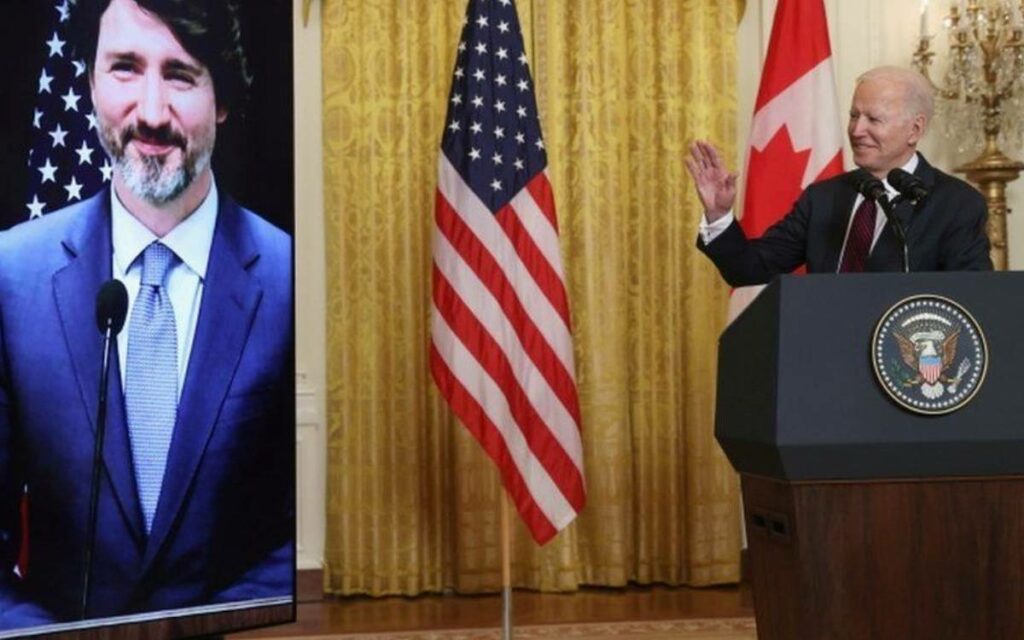 The U.S. and Canada should work together to build new oil pipelines to strengthen North American energy security. Photo credit: Reuters via BBC

There’s an important message for U.S. President Joe Biden as he heads to Saudi Arabia this week to ask for OPEC to increase oil production: he should be asking Canada instead.

Canada’s oil producers have helped free American consumers from the world’s oil dictators before and can do it again – while helping fight the global challenge of climate change.

U.S. average gasoline prices are breaking new records as the world’s oil production and refining capacity is being pushed to its limits.

While the fallout from Russia’s invasion of Ukraine is adding to the strained markets, the situation has been building for more than a year, according toleading energy analyst and Pulitzer Prize-winning author Daniel Yergin.

President Biden is unlikely to find much help in Saudi Arabia, as OPEC has little room to increase production. But “Canada – the world’s fourth-largest oil producer, after the US, Saudi Arabia, and Russia – could provide extra barrels in collaboration with its major market, the U.S.,” Yergin wrote on July 11.

Here are five facts illustrating why policymakers in the U.S. and Canada should work together to build new oil pipelines to strengthen North American energy security.

There’s no question that the U.S. will require a significant amount of oil – and oil imports – for decades to come, even as more renewable energy comes online.

Today, the vast majority of U.S. oil imports come from Canada. But with recent government actions like President Biden’s cancellation of the Keystone XL pipeline, that could change in the future. And it couldn’t come at a worse time, as Russia’s invasion of Ukraine underscores the risks of relying on hostile actors for energy supply.

Oil supply from Canada isn’t just reliable. It also has economic benefits on both sides of the border, supporting jobs and helping lower consumer energy costs, according to a 2021 study published by the American Petroleum Institute (API).

Absent supply of “heavy oil” from Canada, researchers found that in 2019 U.S. refiners would have spent about US$6.1 billion more to access and process other crudes. This improves profitability of the industrial sector, which adds value to the economy on both a state and national level.

The main reason is that U.S. refiners have spent billions to tailor their facilities to specifically process heavy oil like what is produced in Canada, says Christopher Guith, a senior leader with the U.S. Chamber of Commerce.

“It tends to trade at a discount, so you can buy it more cheaply. It’s always going to be cheaper because it’s closer, so it doesn’t have to move as far,” he says. “And it’s coming from Canada, a liberal democracy that we have arguably the strongest relationship with out of the entire global community.”

“We continue to see Canada and its oil companies as being ahead of the ESG curve and a well-rounded candidate to fulfill the world’s ongoing need for ‘friendly’ oil,” BMO analysts wrote in a 2021 report titled Survivor Canada: The Unparalleled: Position of Canadian Oil in a Transition Challenge.

The Oil Sands Pathways to Net Zero alliance has set progressively intensifying targets to reduce emissions to the equivalent of zero by mid-century, meaning that any emissions from production will be balanced by emissions removed from the atmosphere.

Oil sands producers have already achieved success reducing emissions per barrel, or emissions intensity, by 20 per cent since 2009, according to IHS Markit. The consultancy expects total oil sands emissions – not just emissions per barrel – to start going down within the next five years, even as production grows.

Fact: Oil sands has transformed the U.S. energy economy before

Guith says U.S. imports of Canadian oil – which doubled between 2005 and 2019, according to the U.S. Energy Information Administration – have been a “godsend” for energy security.

“If you look back over the last 25 years, bringing Alberta’s oil sands production online is the second most important advent to American energy security, second only to our own shale revolution. It transformed our energy economy incredibly and enabled us to push out OPEC imports,” he says.

“It happened at the exact right time; 2005 was the lowest point of U.S. oil production in 60 years, and all of a sudden here comes our greatest trading partner to the north with essentially a rescue.”

As the U.S. looks for more oil imports in the long term, Canada is still the solution.

This article first appeared on the Canadian Energy Centre website on July 14, 2022. Reprinted here with permission.