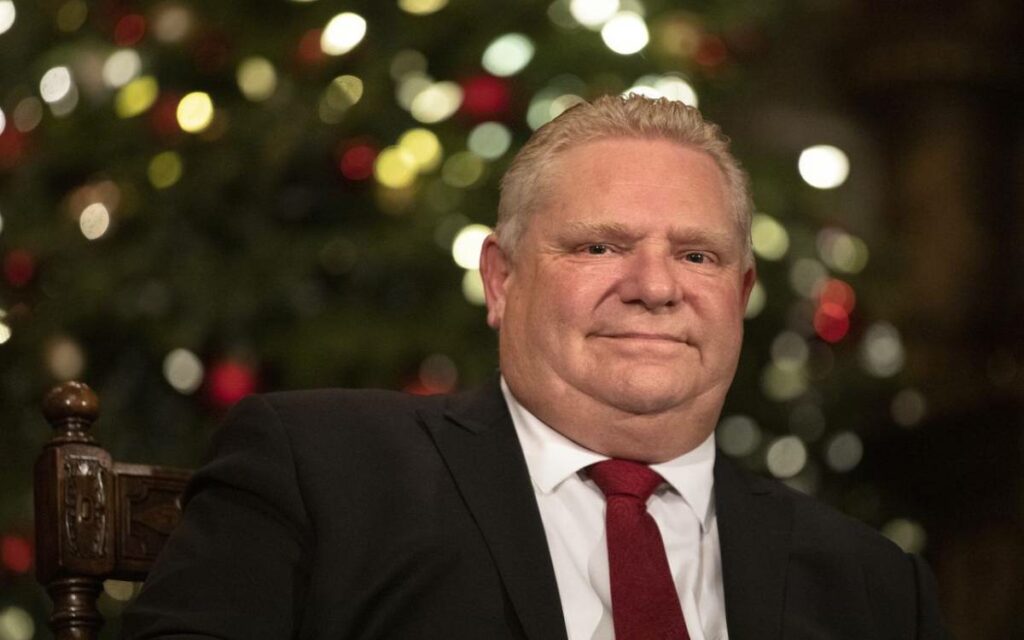 Premier Doug Ford (pictured) heads into the holidays with a sizeable lead over his NDP and Liberal competitors, according to a recent opinion poll. Photo credit: The Globe and Mail

It seems that the Ontario Progressive Conservatives just received an early Christmas present in the form of the latest opinion poll on how voters are viewing the various Ontario political parties. A new survey conducted by Postmedia-Leger found the Conservatives to be in the lead with 38 per cent of respondents intending to vote Conservative in the June 2022 provincial election.

Ford’s support has been gradually climbing in recent months after taking a serious hit in the spring of 2021, when the Conservative government imposed draconian anti-pandemic measures – including the closure of playgrounds – only to reverse them shortly thereafter in the face of massive public opposition.

A crisis is always a difficult challenge for opposition parties as the governing party dominates the news.  This is especially true for the provincial Liberals, with a charisma-challenged leader who does not even currently have a seat in the legislature. Steven Del Duca became Liberal leader at a convention that took place in early March 2020, just prior to the early days of the COVID-19 pandemic and has struggled to establish a profile in the province ever since.

As for the NDP, Andrea Horwath has been leader since 2009 and has lost all three elections she has contested as leader. After the decimation of the Liberals in the 2018 election, Horwath’s NDP was elevated to official opposition status. This accomplishment was viewed as mostly a result of the Liberals’ dismal performance as opposed to any great shift to support the NDP by Ontario voters. The 2022 Ontario election will be the fourth for the NDP with Horwath as leader. As political leaders are typically given a maximum of two elections before being turfed by their party if they do not win, Horwath is living on borrowed time. It is generally conceded that next year’s election will be make-or-break for Horwath as NDP leader.

Although this most recent poll suggests a second majority government for the Progressive Conservatives is likely, a minority is also a possibility. Both Del Duca and Horwath have stated that they will not prop up a Ford minority government, opening up the possibility of an NDP-Liberal coalition should the votes go their way.

Another consideration is whether or not the unions will be actively campaigning against Conservatives in 2022, as they have done in all federal and provincial elections in recent years. In Ontario, unions have been the biggest spenders by far on election advertising, and consistently oppose Conservative candidates. In recent months, the Ford government has gone out of its way to court union representatives, sharing the podium with them on recent announcements involving workplace legislative changes, minimum wage hikes and trade issues such as the US Buy America legislation.  It seems that the PCs are working hard to garner support among unionized voters, as well as trying to discourage the heavy anti-Conservative campaigning by unions that has been a key feature of recent elections. It will be interesting to see if this gambit works.

Timing is truly everything in politics, and the six months remaining before the election could bring many surprises, especially considering the ongoing unpredictability of the COVID-19 pandemic and its many negative impacts on the economy and the personal well-being of Ontarians. For the moment, however, the Ford government can celebrate the holidays with the good news in recent polls.

To all Niagara Independent readers, a very Merry Christmas and Happy Holidays to all, and best wishes for a happy, healthy COVID-free holiday.