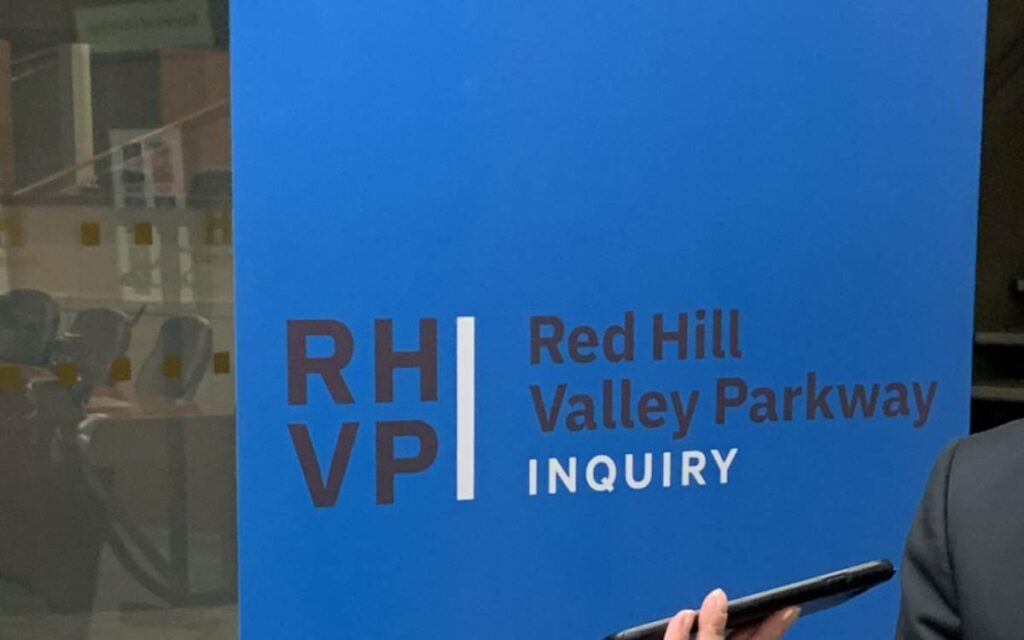 Background: The RHVP Inquiry often refers to two different tests. One is a pavement test strip that Dufferin Construction conducted to test the aggregate mix used for the paving. The second is a skid friction test conducted by the Ministry of Transport (MTO) to assess proper tire to pavement friction, in other words, how slippery was the asphalt at 90 km/hr.

In 2003, Marco Oddi was assigned to the RHVP Office for the City of Hamilton. As the Project Manager, Marco Oddi would report directly to Gary Moore, who in turn, was primarily responsible for the RHVP design.

At the judicial inquiry, Commissioner lawyer Andrew Lewis would present emails, reports and documents retrieved from the City of Hamilton. From these documents, he would ask Marco Oddi questions about the contents and intention of the communications.

Interestingly, someone raised concerns with Dufferin Construction on the use of aggregates for the paving. Dufferin would respond in an email to Oddi (and others) a response to the concerns raised. However, even though Dufferin responded, Oddi couldn’t remember who raised the concerns or what the concerns were.

Oddi would also not recall whether he received the results of the pavement test strip, which contained samples that failed.

He would also fail to recall who requested the MTO to conduct friction testing on the newly paved road. And when MTO completed the friction test in 2007, Oddi would state that although he would have received the MTO skid test results, he wasn’t trained on how to interpret the measurements.

Mr. Janicas would testify that the use of the stone mastic asphalt (SMA) on the RHVP would be Dufferin’s first project of using this type of hot asphalt mix. A test strip of the SMA was completed and analyzed by Dr. Uzarowski of Golder Associates (the quality control consultant for the City of Hamilton).

After the testing, Dr. Uzarowski sent a communication to Dufferin Construction that the test strip failed, and subsequently recommended a new test strip.  However, Dr. Uzarowski would advise that if Dufferin were to commence the paving of the RHVP, it would do so at their own risk.  The next day, according to Janicas, Peter Gamble of Dufferin Construction gave approval to proceed with the paving. No second test strip was conducted.

Regarding the MTO skid friction testing, Janicas could not recall any concerns.

The RHVP Inquiry continues next week.